Well, since you ask me for a long rambling story about a surf destination that I’ve never been to…

Mundaka is on the Atlantic coast of Spain just to the west of Bilbao and faces due north into the Bay of Biscay. When Phil and I were playing in BFB waves yesterday (Big For Bournemouth), Mundaka was getting the swell face-on bigly (Nazaré down in Portugal saw wave heights over 28’ at the same time) because the waves were coming from a storm to the north west - we were seeing the swell that got reflected around coupled with the strong South Westerly pushing it up the English Channel. 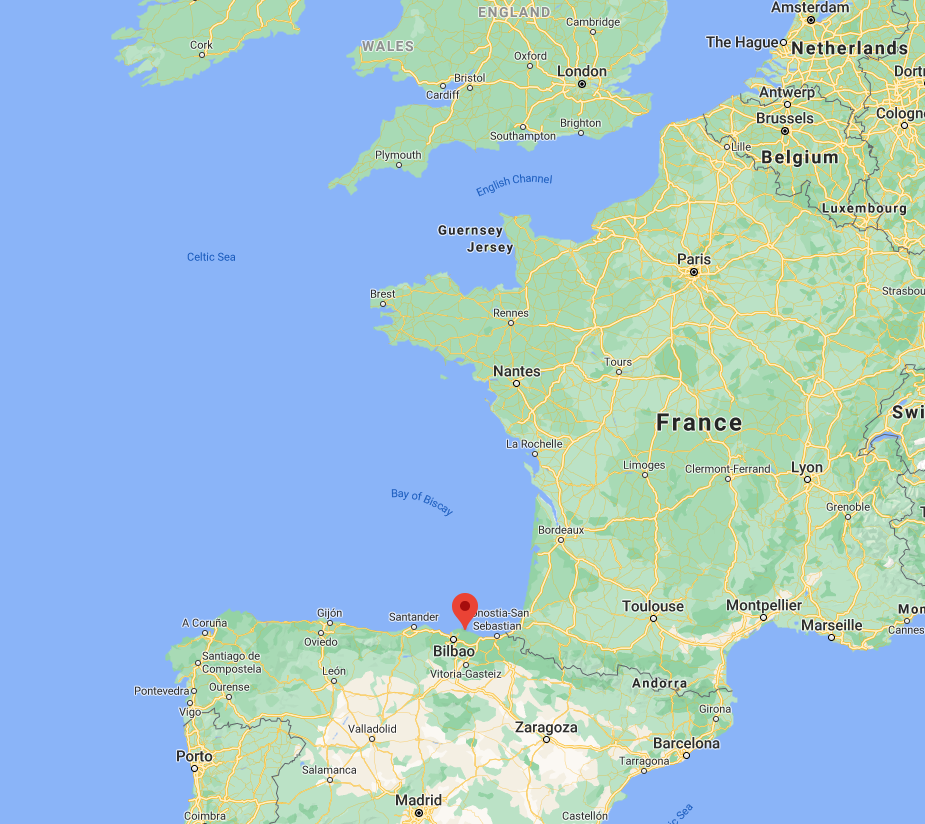 The local map shows how the headland provides some shielding from the Atlantic - waves need to be coming from the North or North West ideally but that still leaves plenty of Northern Atlantic in eyeshot. 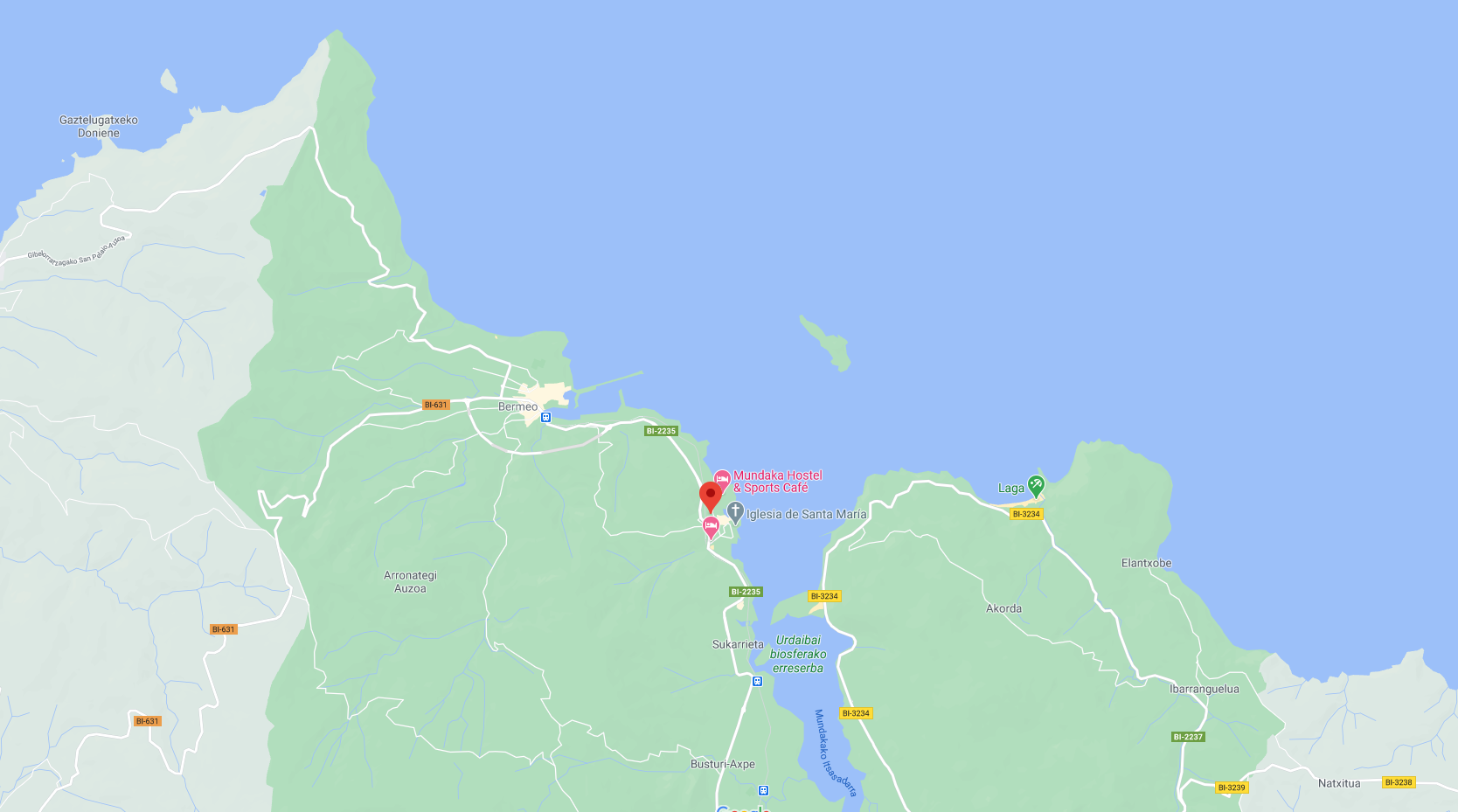 This swell chart shows just how much clear ocean Mundaka faces, and how the swells have been hitting it recently, compared to the roundabout route the waves have to take to reach us in Bournemouth. 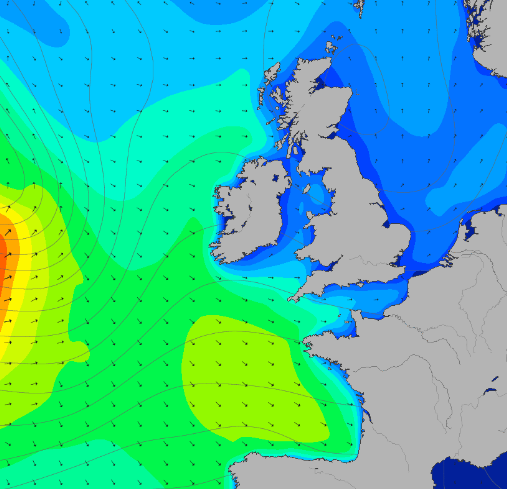 MSW gives the history on the place here - essentially it’s a river sandbar that moves around a lot, used to be on the pro tour but got dropped a few years ago.

The local satellite shot shows deep water shallowing out gently onto a sand bar – with hundred miles of fetch behind it you can see why it gets powerful waves. The little beach to the right looks interesting too. 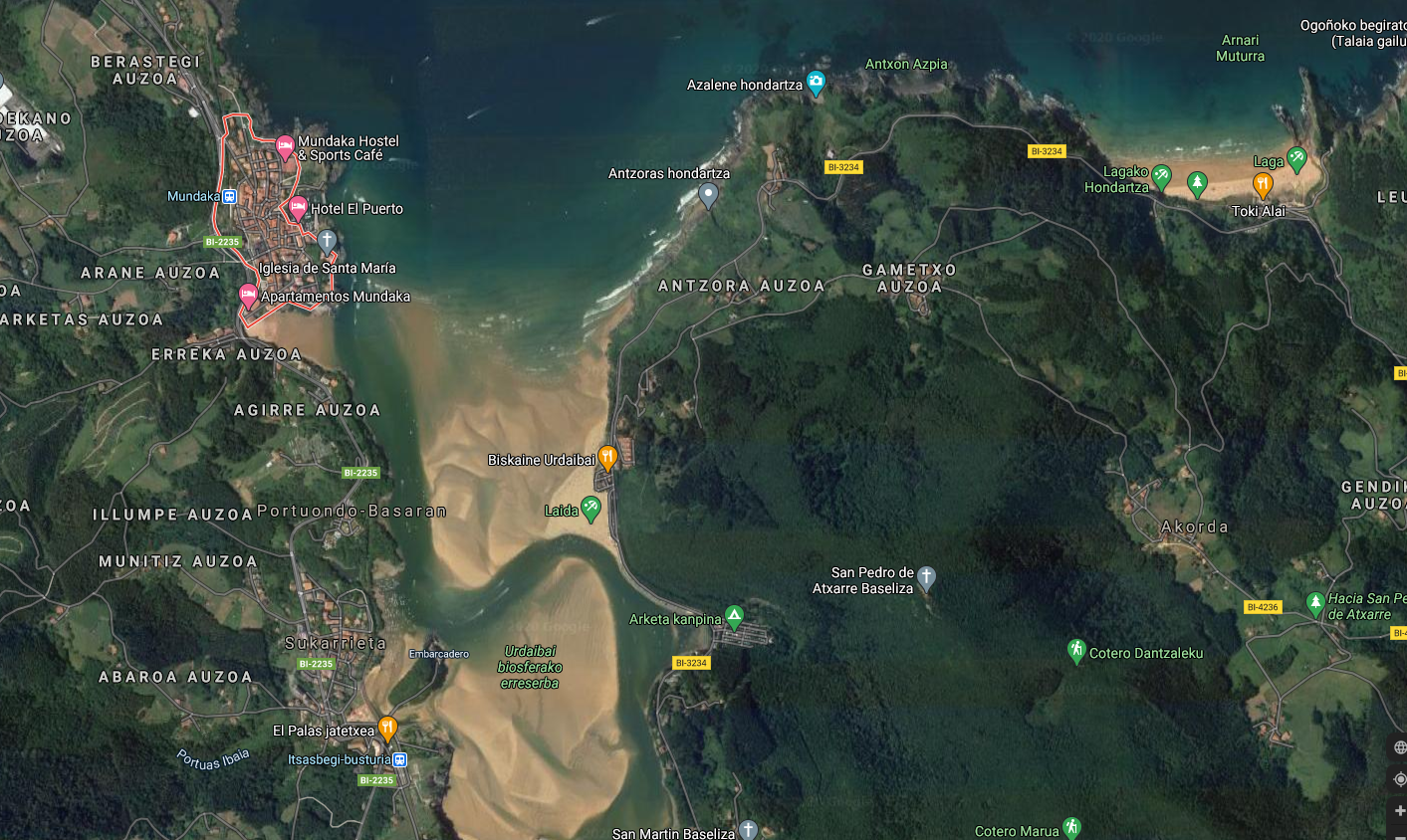 As for conditions we turn to MSW again… 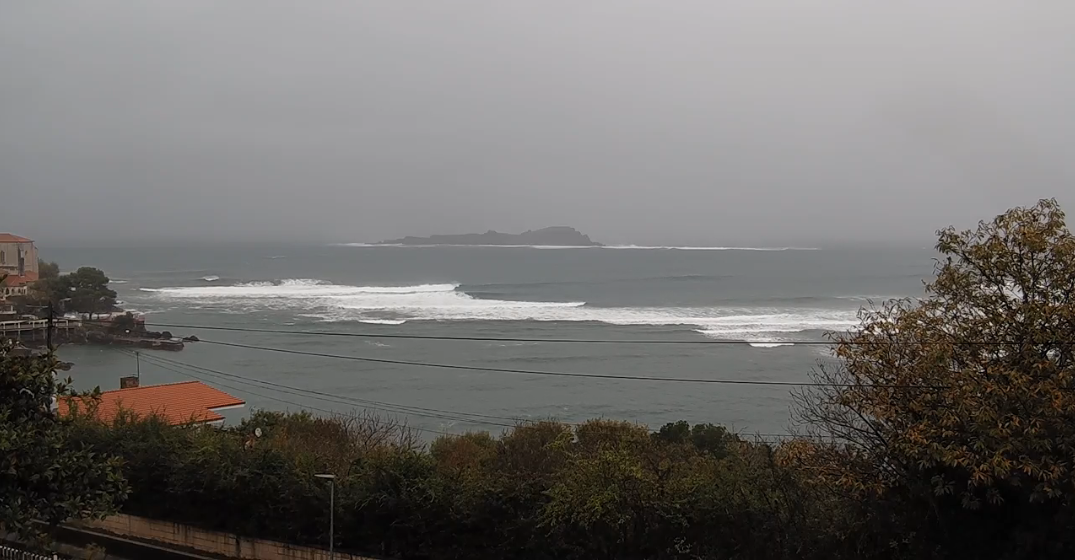 “Mundaka is a dream left hand barrel and possibly the best river mouth wave in the world. A long triangular sandbank catches the stronger NW swells, creating a long flawless tube with rides of up to 150-200 meters possible. From the peak, the wave sucks up hard, making for steep challenging take-offs straight into a sick barrel section. The ensuing long, fast wall, allows a few turns if you are going close to warp speed. The final two sections of the wave can vary in quality depending on the sandbar, but frequently they offer hollow cylinders with less crowd pressure. Perfect autumn conditions include strong S-SW winds and the tide must be low incoming, otherwise the outgoing rip is horrendous. Good conditions at Mundaka rarely last for more than two days, as the large swells fade, so this classy wave is only rideable about 50 days a year.

Always crowded. Moderately dangerous, depending on swell size, wind and crowd. Be careful of the rip. Fairly consistent although almost never works in summer and only works from low to about mid tide. The wave is next to the port and village of Mundaka, a delightful fishing village apparently unspoilt by its surfing fame. Good facilities in village and friendly local residents. Parking can be difficult when the wave is on. Camping and surf shop nearby. Some estuarine pollution."

If you always need to be on an incoming low tide then it’s worth picking your week or you’ll need to be out there at crazy hours!

(There's a nice bit of surf video complete with the heavy rock guitar that's a legal necessity on YouTube surf video of Mundaka.)

Why does it matter? In short – separation – this Thursday for example (29th Oct) is seeing a 17.5ft primary swell at 19 seconds separation! (We are lucky to get 9 seconds here.) That makes it a whole different string bag of custard; paddling out through that rather than the constant pounding that the usually two combined short-period wave fronts hits us with sounds like a dream. MSW gives Thursday 5 stars! 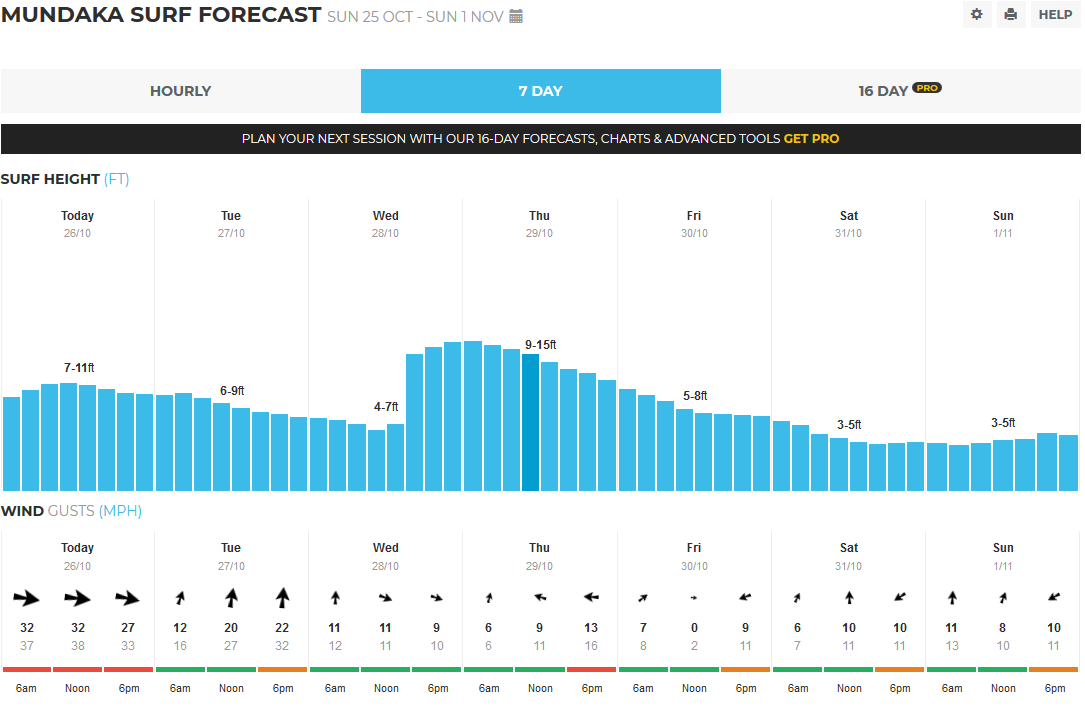 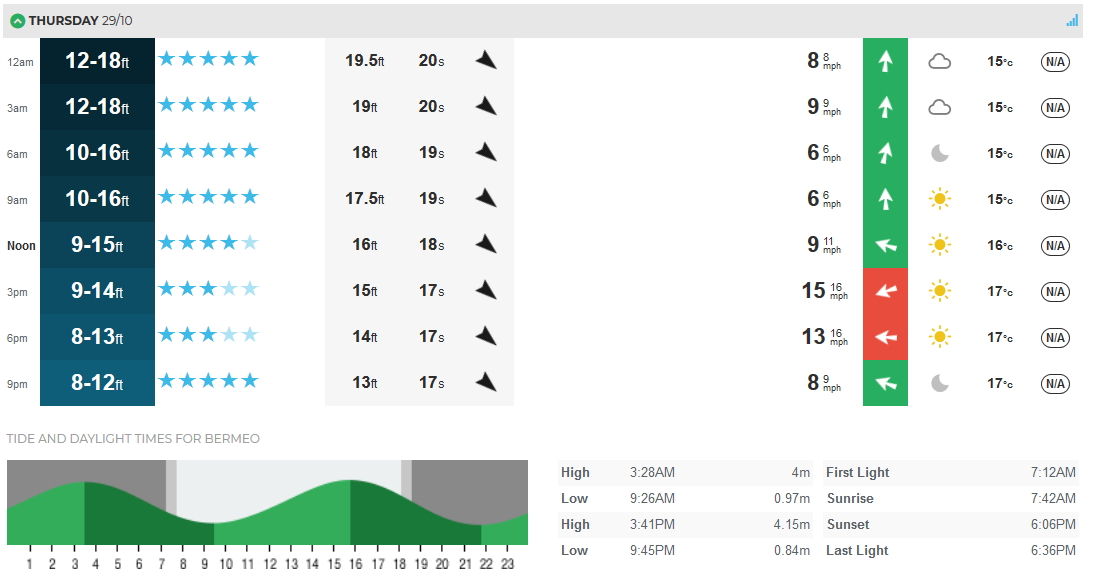 Well, there’s the ferry straight out of Poole if you have two days to spare and aren’t terrified of crossing the Bay of Biscay in stormy conditions..

More sensibly – Rome2Rio offers a range of options including flight and an interesting one that takes a car ferry via Guernsey to St Malo then there’s a trifling 540 mile drive all the way South across France and Spain – coastal would be longer but more fun especially in a camper. 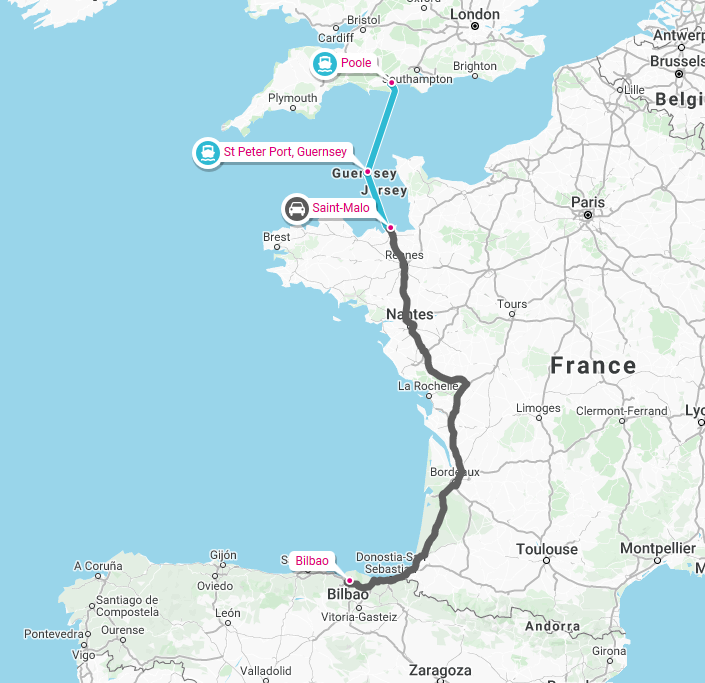 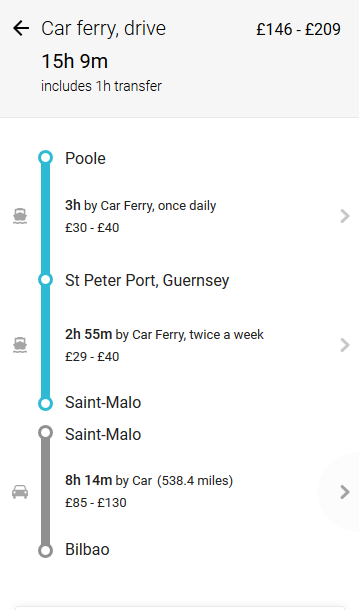 Camping in Mundaka is a little pricey at €30 per pitch but that includes a hook up (an unusual bonus for a campsite but good if you’re single I guess). The bungalows at €77 each pn seem better value. 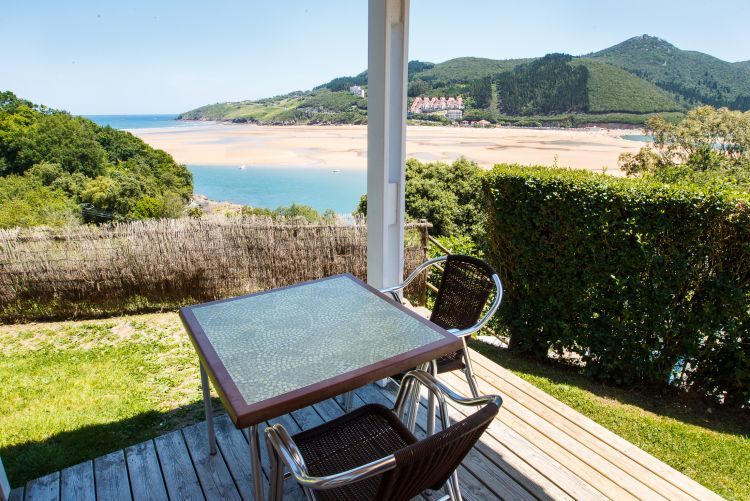 Summary from someone who’s never been there… 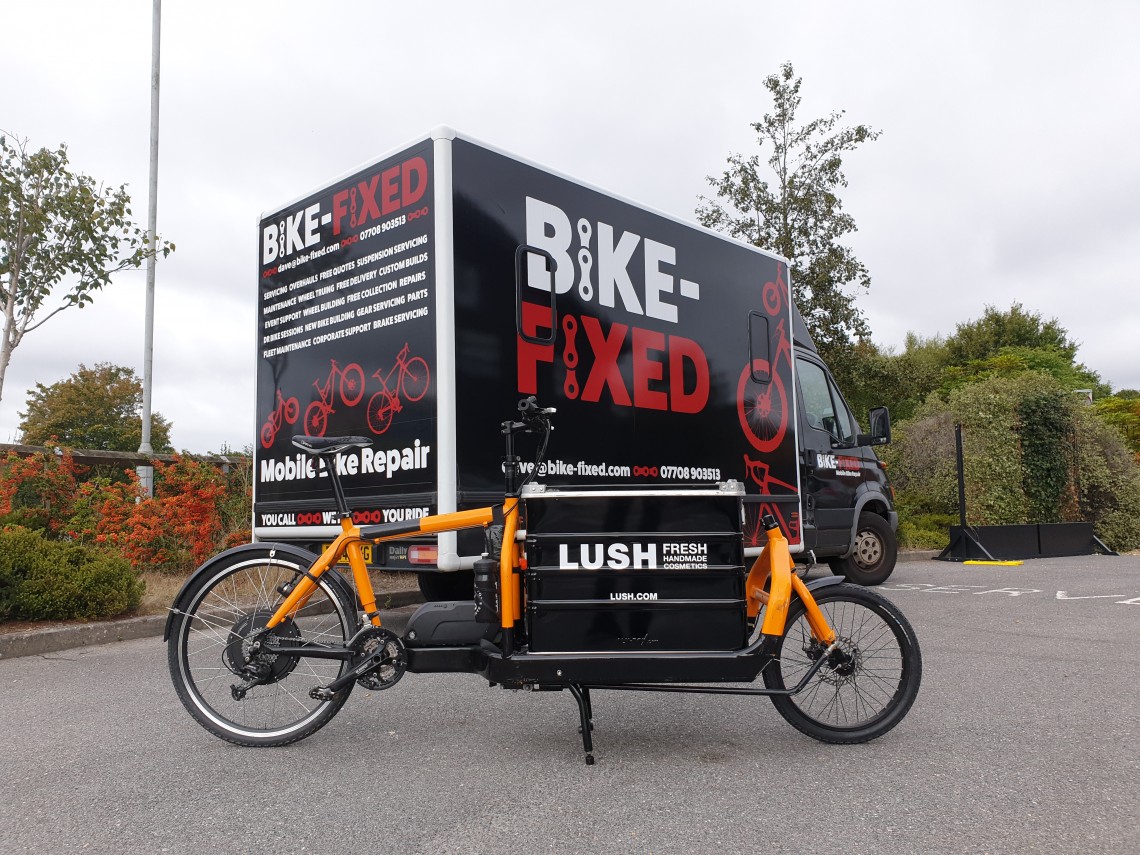