The former totals 38 pages long and the latter 19, and whilst they focus on bivalve health and saftey there is a lot of detail included that relates to the condition of the water in Poole Harbour so I have combed through both and extracted the salient points here.

"The main freshwater inputs to the harbour are from the Rivers Frome and Piddle, with smaller inputs from the Corfe River, Sherford River and several other streams. These rivers are likely to be more significant sources of contamination than the sewage effluent discharges to the harbour."

"The estuary has a catchment area of around 800km2. Approximately 70% of the estuary catchment is farmed, with cereal, dairy and cattle and sheep farming being predominant (Environment Agency, 1999)."

"..there is also a traditional fishery in the sandy littoral areas of the harbour such as Whitley Lake where cockles are harvested by hand rake (Royal Haskoning, 2004; Jensen et al., 2005a). The harvesting season for wild cockles extends from 1st May to 31 January"

All good so far but then we get on sewage discharge..

This is consented flow of treated sewage (mostly UV) that runs continually as, bluntly - the stuff needs to go somewhere. But it shows the sheer volume of discharge into Holes Bay under normal conditions - frankly the remaining outlets even when considered together pale into insignificance.

"Faecal coliform concentrations in the effluent from Poole STW have increased since 2006. The underlying cause of this deterioration in effluent quality is not known."

The report was released in 2009 remember but their figures back that comment up, showing a steady increase in the levels of post-disinfection faecal coliform data (RH Column)

This is where it gets to storm water discharge:

"Intermittent sewage discharges (storm and emergency overflows) to shellfisheries represent a significant risk to human health (Garreis, 1994). Storm sewage is untreated sewage in a mixture with surface run off from combined sewerage systems that discharge via combined sewer overflows (CSOs) and/or storm sewer overflows (SSOs). Although some dilution from rainwater is afforded, the bacterial loading of storm discharges is significantly higher than treated sewage effluent (particularly where UV treatment is applied to the latter), with faecal coliform concentrations typically around 105-106 cfu per 100ml (Kay et al., 2000, Lee et al., 2003). Emergency discharges of untreated sewage occur in the event of a fault in the sewerage infrastructure (typically a blockage or pump failure)."

"The overflows from Sandbanks Pavilion sewage pumping station (SPS), Seacombe Road SPS, Elgin Road SPS and East Quay SPS are within or close to the cockle fishery in Whitley Lake in the north-east of the harbour and storm or emergency discharges from these assets are likely to have a significant impact on levels of microbiological contamination of shellfish in the vicinity of the discharge point. No microbiological monitoring is currently undertaken in this area."  (this article was in  2009 and there has been sampling of mussel flesh in Whitley Bay there since 4th June 2015)

"ADAS (2003) developed a catchment level model (Catchment Source Apportionment Tool, CSAT) to calculate the faecal coliform load exported from the Frome and Piddle catchments to Poole Harbour. The model incorporated the loads from both point sources (STWs and CSOs) and diffuse organic wastes spread to agricultural land (both naturally from livestock and artificially applied as manure or slurry). The model calculated that point sources are responsible for more than 95% of the annual faecal coliform load exported from the catchment, with CSOs being the most significant source during storm events. Predicted faecal coliform concentrations at the tidal limit showed a seasonal pattern with concentrations peaking in the winter. This may partly account for the similar seasonal pattern in E. coli levels in shellfish seen at several sites in the harbour (See section 5)." (Emphasis mine)

There are areas of grazing land bordering the south and west of Poole Harbour and several beef and dairy farms in close proximity to the shore. Discharges and run off of farm waste (slurry or manure) from these farms have the potential to contribute to levels of microbiological contamination in shellfisheries in these areas. However, the Environment Agency is not aware of any issues at these farms that suggest they are a significant source of contamination (Julian Wardlaw, Environment Agency, personal communication)." (Emphasis mine)

"..the EA has undertaken monthly monitoring at three additional sites in order to assess the impact of UV disinfection at Poole, Wareham and Lytchett Minster STWs on water quality in the harbour. The locations of these sites are shown in Figure 5.1. A summary of faecal coliform data for the period 2003-2009 (post completion of the UV disinfection schemes) is given in Table 5.1.

Poole Bridge is located at the outlet to Holes Bay - the maximum figure most likely reflects discharge of raw sewage during storm conditions and shows how bad things can get.

"A summary of the E. coli data for the period 2004 to 2009 (post completion of the UV disinfection schemes) is given in Table 5.4. Sporadic results above 4,600 MPN per 100g have been recorded at all sites within the harbour. The highest levels of contamination have been recorded at Barrel ‘O’ and Rockley monitoring points in the Wareham Channel. Both sites have returned E. coli levels above 46,000 MPN per 100g (i.e. ‘Prohibited’ level results)."

"Whilst existing monitoring points are generally well placed in relation to these sources, there is currently no monitoring point in the wild cockle beds in the Whitley Lake area."

"6. A new monitoring point at North Haven Yacht club (B54CN) should be introduced at Whitley Lake in order to classify the wild cockle beds in this zone. Monitoring at this site is recommended because of the potential for contamination from intermittent sewage discharges in this area. The monitored species should be cockles." (This was attempted but it transpired that cockles do not travel well so mussels were used instead; further studies showed that mussel meat is not a good proxy fro cockle meat when it comes to E. Coli saturation so a mixed result.)

"At present, the majority of Poole Harbour is classified B-LT for a variety of species. One area (Wareham Channel) where the influence of the Rivers Piddle and Frome is the greatest is currently classified as C for the species harvested from there. The majority of these classifications (including all classifications for Tapes spp. and cockles) are based on the results of mussel samples taken from deployment bags. Whilst this may be a historically accepted practice in Poole Harbour, there is growing evidence from other areas (e.g. Langstone Harbour) that Tapes spp. accumulate E. coli to a much higher level compared to mussels (Lewis Coates, pers. comm). This has had major consequences for other shellfisheries in such areas (eg. native oyster sampling may return a B classification whereas sampling of Tapes spp. may return prohibited level results.) This implies that Tapes spp. should be sampled in preference to mussels, although it is understood that there may be
practical challenges in doing so."

"Since 2006, there were seven instances where both mussel and Tapes spp. were sampled from the same location on the same date. These individual results are listed in Table 4."

"The number of samples considered is limited but illustrative of the potential weaknesses of using mussels to classify Tapes spp. On all these occasions Tapes spp returned a higher result than mussels, and on three occasions results for Tapes spp exceeded 4600 E. coli MPN/100g when the results for mussels were below this threshold."

So - it isn't practical to sample cockles as they don't travel well, so mussels are used as a proxy. Fine but it appears that cockles accumulate E. coli at a faster rate. Given that the cockles in Whitley Lake are collected and eaten by the public this would seem to be something that is important to resolve.

For a more up to date take, CEFAS' own website has a trove of data on shellfish pollution - as expected they are still sampling mussels not cockles but it is at least in Whitley Bay. They did sample off NHYC for a few months in 2016 before opting for a site in the centre of the area: 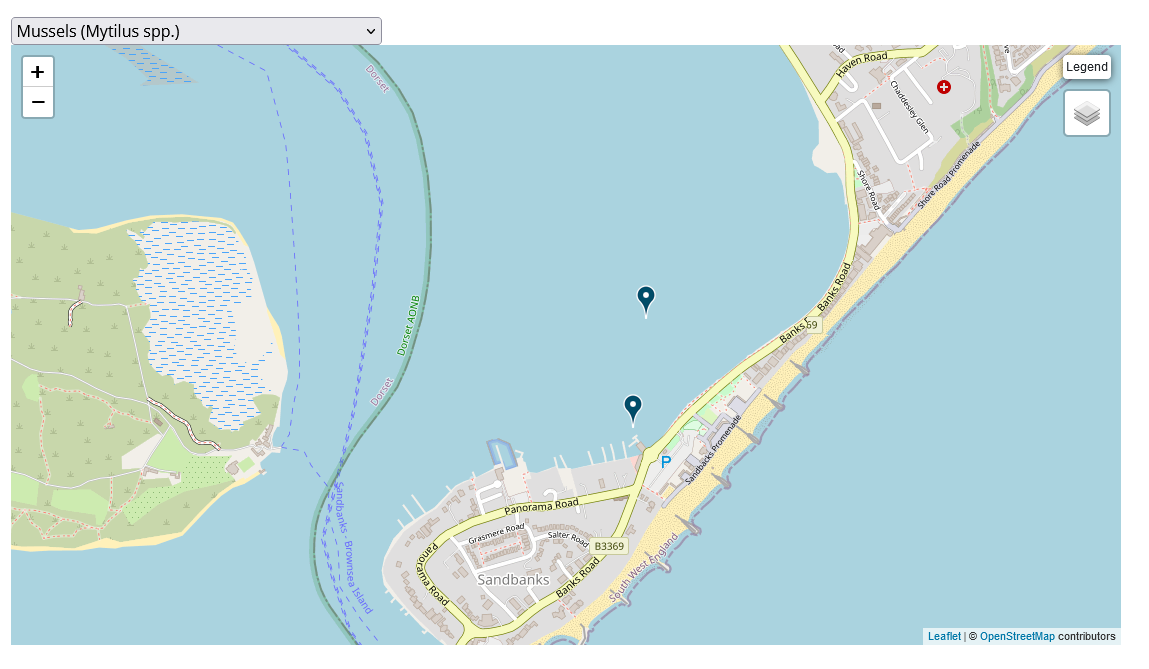 The results are interesting bearing in mind how mussels are shown to be an unreliable predictor for the safety of cockles (the vertical scale is logarithmic) with a maximum E. coli count of 2400 E.coli per 100g on August 6th 2019 and levels that are massively higher than those found off Barrel 'O' (located North of Brownsea Island).

Now bear in mind that when cockles and mussels are taken from the same area and tested, the cockles were found to have up to 28 times higher levels of E.coli than the mussels, it does suggest that the cockles should be tested separately, and that perhaps all is not well in Whitley Lake.

According to the interactive CEFAS map, cockles are tested in Portsmouth and Chichester Harbours but there is no testing of them whatsoever in Poole Harbour.

E. coli dies when the cockles are cooked, so as long as that's done properly the levels are not a threat to the public, though reheating food with E coli present may be a problem, as the bacteria seems to gain super powers (emphasis mine):

"At the ARS Eastern Regional Research Center's Food Safety Research Unit in Wyndmoor, Pa, Vijay K. Juneja and colleagues heated beef gravy samples contaminated with E. coli 0157:H7 to 114.8 °F for 15 to 30 minutes. The heat was not sufficient to kill the bacteria, but enough to stimulate it so that it could adapt to the stressful heating conditions. They then cooked the gravy to a final internal temperature of 140 °F.

Is the level of E. coli in shellfish a good indicator of whether the water is safe to swim in? It's not clear-cut as different shellfish handle bacteria with varying degrees of success and each are continually trying to rid themselves of it, so levels will vary substantially over time. There is something to be said for the short term 'averaging' ability of the shellfish vs the sporadic water sampling that may miss recent spills but overall more research is needed.

Perhaps daily testing of mussels, cockles at the same location and the water around them throughout the year may yield a reliable model and enable the little guys to become cheap and robust sentinels of the Harbour's health.

Images and text from any government reports in this article are included subject to the Open Government Licence for Public Sector Information.