Data from the Wessex Water Coastwatch system. The feed isn't infallible - some alerts are erroneous and several overlap so you might see three 'Starts' and only one 'Stop' for example, but it gives you an idea of how much raw sewage is being pumped into Poole Harbour. Remember - this is just for the four CSOs in the Sandbanks area - the main outfalls are all in Holes Bay - two dozen CSOs licenced to pump 44,000 metric tons of treated sewage each day into the water and unmonitored (and therefore unlimited) amounts of raw sewage when Wessex Water deem the rain to be 'heavy'. This is a list of the raw sewage discharges.

The UK is riddled with a crumbling network of sewage pipes that leak and overflow beneath our feet. Our combined sewerage network mixes both sewage effluent and surface water runoff to be treated at one of the thousands of wastewater treatment plants dotted around the country. This system can become overwhelmed at times of heavy rainfall. Over 23,000 sewage overflows, installed throughout the network, are designed to take the pressure off the system when it becomes overloaded, preventing overflowing drains and sewage backing up into our homes. However, these overflows release a chemical cocktail of sewage pollution, agricultural pollution, contaminants from roads, household chemicals, and rainwater directly into our rivers and the ocean. They are therefore intended to be for emergency use only, during periods of ‘exceptionally heavy rainfall’.

The Surfers Against Sewage 2022 Water Quality Report that states Wessex Water discharged only 215 hours over the whole of its cachent area - this is because Kite Beach is not yet designated as a Bathing Water and as such nearby discharges are not included in their figures. The BeachPeople Whitley Lake Campaign aims to change this. 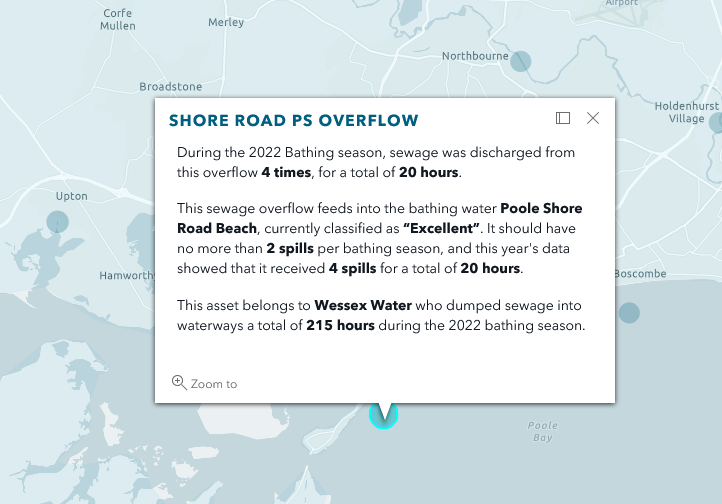 Time shown is the time the discharge ended. Discharges can span days. Please see Sewage discharges into Poole Harbour for a complete list.